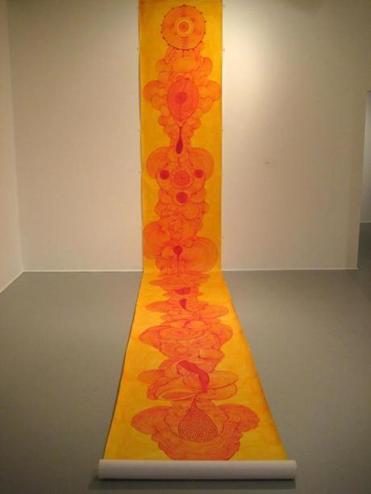 There are more gulfs among the drawings in “Residue,’’ a juried show featuring 16 artists, chosen from more than 400 applicants by curator Steve Holmes. The exhibit stretches the meaning of residue too far, beyond the trace a pencil leaves and into conceptual art and tales of love. Such is the struggle with a juried show: Works are often chosen in part because they’re disparate, and then the organizer has to somehow tie them together.

Still, there are some terrific drawings here. Sky Kim’s automatic drawing “Untitled 4’’ unfurls on an orange scroll that rolls onto the floor. She writes over it in red with great striated, biomorphic loops and coils that caress the eye. Elise Kaufman’s delicate townscape “Ghost Estate, Ennis, Co. Clare,’’ made with puddles of India ink on non-absorbent paper, swims like a mirage; Colleen Kiely’s graphite “School Bus,’’ showing the square rear of the bus trundling into the distance, has a similar mournful quality.

Thomas Duncan’s marvelous untitled drawings, made with infinitesimal marks, are gorgeous blends of static and snow. They converse with Irene Clark’s “Morphic Resonance - Bird Migration,’’ in pastel and charcoal, which captures the swift, agitated momentum of birds swarming against a gray sky.

Two artists hit the residue theme on the mark: Jillian Clark’s “Charming the Multiples,’’ an installation of drawings made with snapped string coated in chalk, shimmies in ghostly verticals and horizontals over three walls, leaving breaths of blue and purple dust on the floor. And Eric Sweet’s spare, heartbreaking “Ideal City (Birkenau)’’ features ghostly impressions in paper of a scale model Sweet made of the Nazi death camp, brought into chilly relief with white-blue LED lights.

The new media works fall flat. Billy Friebele’s drawings juxtaposing GPS mapping lines with video of locomotion has good conceptual underpinnings - our movements are being monetized. But it’s all idea; the resulting gesture is merely random. Jenny Herrick’s “60-Seconds’’ video of a man walking in a circle, videotaped from the center of the circle so he appears to walk in a straight line, is more about space, performance, and landscape than it is, ultimately, about line.

Cate McQuaid can be reached at catemcquaid@gmail.com.